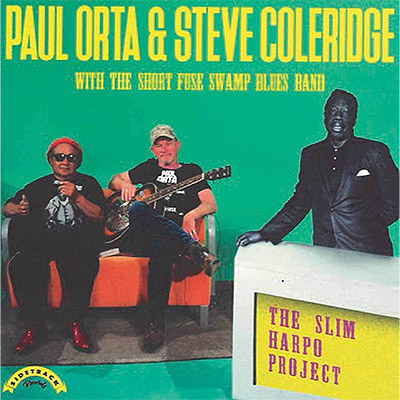 Firstly, a little background. The music on this disc was recorded at two sessions in Spain in the Autumn of 2017. Sadly, it was to be Paul Orta’s last recording and he never got to hear the finished article. He is backed by guitarist Steve Coleridge and his Short Fuse Swamp Blues Band, with production by Coleridge. Steve Coleridge and Paul Orta had been planning to do an album of Slim Harpo songs for several years before a slot in Orta’s busy touring schedule opened up.

On a personal note, the B&R team met Paul a couple of times in Utrecht and always found him very approachable and welcoming towards his fans. Paul passed last year after a battle with cancer at the too-early age of 61. The little guy from Port Arthur will be sadly missed.

Equally, Steve Coleridge interviewed, researched (for B&R) and recorded musicians who had played with Slim Harpo, such as Rudy Richards as well as recording bluesmen such as Clarence Edwards and T Bone Singleton.

The CD includes versions of well-known Harpo songs (no ‘Raining In My Heart’ or ‘Baby Scratch My Back’ though!), including a lovely version of ‘I’m Your Breadmaker Baby’ with overdubbed harp, and toe-tapping versions of ‘Got Love If You Want It’ and ‘Buzz Me Babe’ There is also a nice laid-back take on ‘Jody Man’ (one of my personal favourite Harpo numbers), the instrumental ‘Buzzin’’ and inevitably ‘King Bee’

Also worthy of mention is the instrumental ‘Moody Blues’ with nice gritty sax from Jeanne Wilson and ‘One More Day’. Pepe Moreno contributes sturdy piano to ‘You Aint Never Had To Cry’, Wilson once more adds her raw-edged sax to ‘Dynamite’ and the closing cut is the relaxed late-night instrumental ‘Dreamy Blues’.

Paul Orta’s many fans will want to obtain this excellent tribute to a fine bluesman. Big thumbs up also for top-notch support from the backing band. This set is also available as a twelve-track vinyl LP, omitting ‘Jody Man’, ‘King Bee’ and ‘Dreamy Blues’. See small ads for details of how to obtain copies of the CD and vinyl album.

The late Paul Orta and Shortfuse playing “I’m Gonna Keep What I got” in Spain. Paul Orta, born in Port Arthur; Texas first crossed paths with Steve Coleridge in America, where Steve had travelled with the intention of investigating Blues music, especially Slim Harpo. He was one of the finest harmonica players, being one of the very few to ever be endorsed by both Hohner U.S.A and Hohner Europe